Being obsessed with football systems here at Differentgame, we wanted to look at how different formations effect teams’ ability to make blocks, make clearances, make tackles, intercept passes, and pick up loose balls. What’s the best football formation to use to win the ball back?

We tend to scoff at Harry Redknapp saying things like: “You can argue about formations, tactics and systems forever, but to me football is fundamentally about the players.”

Imagine our horror then when we looked at the MCFC analytics data from last season and found that the numbers were pretty much the same across all the main formations when it came to winning the ball back. The most we could say was that playing 442 led to sides making a few more clearances. Unfortunately, the number of clearances a side makes doesn’t mean it necessarily concedes less goals or anything else meaningful.

The main formations used last year (in order) were 442, 4411, 4231, 451 and 433. All these were used by a good range of teams, with at least half of EPL teams using each at one point or another. While no’s of tackles, interceptions etc didn’t vary much between formations, goal difference did:

4231 was the most successful football formation last year. It was much favoured by passing teams such as Arsenal and Swansea but most teams dabbled in it at some point or other during the season

451 was a formation generally used most by sides in the bottom half of the table. Nobody would be surprised to learn that this ‘negative’ tactic makes it difficult to score goals, and just invites the opposition on – especially when you employ it against better teams than yourself.

It’s 433 that’s the real surprise here, though. It was used by both good teams (Chelsea, Liverpool, Man City) and bad (Wigan, QPR) yet overall it fared poorly:

This was despite being as good a mechanism for creating chances as the other formations. However, either there was a load of bad finishing or the types of chances 433 created were poor. Why? Because it was nearly up there with 451 in terms of how many shots on target a team needed to actually score. Even though it took more shots on target to score against it too, the fact that teams playing it conceded lots of shots against them, the effect was negative. The chart below shows the goal efficiencies of the systems (big green lines = good, big red lines = bad):

This got us thinking of the now infamous documentary Being: Liverpool and the comments made by manager, Brendan Rodgers. Rodgers insistence is that “transitions” are key in the modern game and he is forever imploring his charges to get into positions quickly once the ball is lost.

The numbers (albeit from a small sample size) from last year seem to show that the 433 Rodgers is now employing at Liverpool is probably the hardest formation to reset defensively when your own attack breaks down. It kind of make senses if you consider how each player would be spread across the pitch once you’ve lost it.

Theoretically, this is where the aggressive offside and high pressing come in to the Total Football philosophy Rodgers seemingly subscribes to. Unfortunately, Liverpool’s centre backs lack pace, and the three midfield players currently in use – Sahin, Allen and Gerrard aren’t exactly the players one would choose to keep pressing or to cover all bases once possession changes quickly between the teams.

It was always going to be a year of transition (ahem) for Liverpool. But the immediate employment of a Barcelona-style 433 rather than the 4231 he employed at Swansea could be a case of the Liverpool trying to run before they can walk. It’s all a bit reminiscent of AVB’s attempts at revamping Chelsea’s philosophy without having the players in place to do it justice.

Following this awesome piece of work by @leejmooney I checked out the factors correlating with losing matches that formation could possibly effect. Sure enough 433 comes out poorly when it comes to conceding shots on target inside the box, being shown yellow cards and losing challenges.

Against Everton at the weekend, Rodgers cited Everton’s direct game as the main threat towards Liverpool. However, in the 25mins that Everton dominated before half time, the below graphic shows Everton didn’t win a single long ball played centrally towards the box from deep: 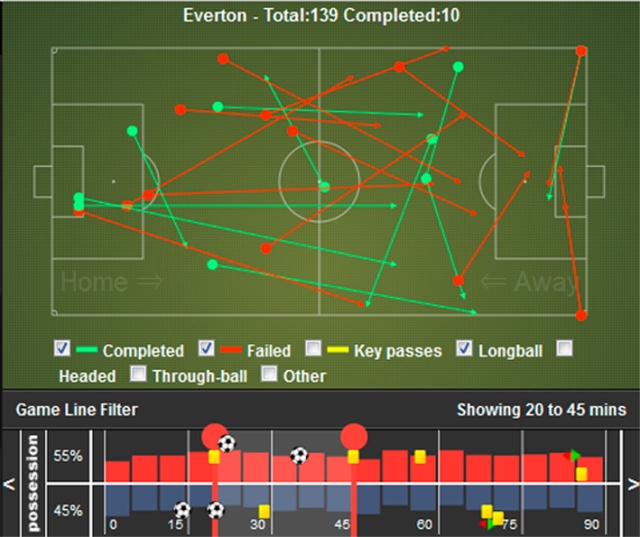 The main problem was Everton’s numbers in midfield (effectively 6 with Leighton Baines playing so high up the left). They were able to intercept the ball and dominate the play, making nearly double the amount of short passes Liverpool did. The withdrawal of Suso and Sahin at half time for Coates and Shelvey effectively meant more numbers behind the ball for Liverpool and a more comfortable time. Everton only mustered one shot on target after the break and that was from a wide position just inside the box.