Posted on February 17, 2013 by differentgame

Having now recorded all the publicly available shot data (30,000+ efforts) and found little difference between our findings at the 2,000 and 15,000 recorded shots stage, we thought it was time to do something a bit more interesting with the data.

What has really intrigued most people and sparked the most debate is the fact that it takes 33 direct hits at goal for an open play shot from outside the box to go straight in. This season the trend continues – it’s just a shade under 33.5. So what happens to all these speculative efforts? Here’s what’s happened this season:

That tells us not even a quarter of shots from outside the box in open play have tested the goalkeeper. However, on average it’s taking less than 8 shots on target to beat the keeper from range.

There seems to be a general feeling amongst number bloggers that there’s a lack of decent, reliable stats for goalkeepers and we at Differentgame have whined about it ourselves in the past. The consensus is that save % varies too much from season to season to conclude anything from. However, Differentgame feel that if there’s one kind of shot a keeper could be most fairly judged on, it’s the hit from distance. It’s far enough away from goal, and will generally have numerous defenders trying to get in the way. Ask any keeper and we’re sure none will be happy at getting beat from outside the box.

So which keepers have been good and which bad over the last couple of seasons at saving open-play shots from outside the box?

The chart is handily colour coded to make it easy (hopefully) to see the variation over the two seasons. There’s just two keepers been consistently good (green) – De Gea and Cech and six keepers have been consistently average (amber). No one has been consistently poor (red). Six have moved up or down one grade, and only one, Foster has moved full across the range from good last year, to poor this year. We feel that by these measures there’s at least some value to be taken from save %.

However, it doesn’t quite give us the full picture. Remember we said that this season, it was taking just under 8 shots on target from open play outside the box on average before one went straight in? Last season it was just over 7 (it’s difficult to describe just how abysmal Robinson was for Blackburn). We can therefore compare keepers over the last two years to the average: 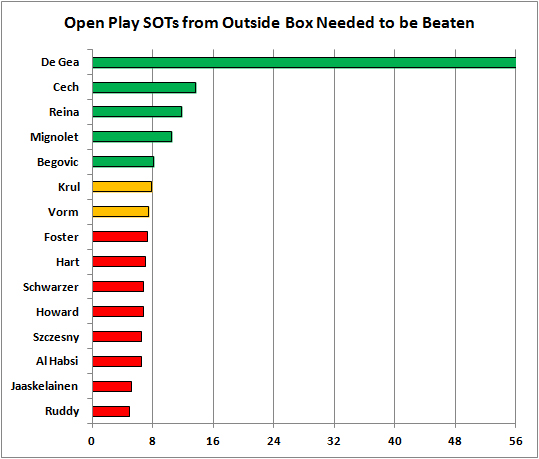 Differentgame think that gives a better picture of who’s hot and who’s not. De Gea’s record since being in the EPL is staggering. But we aren’t quite finished (apologies if this is long). Being of the Everton persuasion we’ve often noticed over the years how far off his line Tim Howard tends to be when he’s beaten from distance. Almost to the point where he seems to dive underneath the ball. Having watched Richard Wright and Paul Gerard do the same over the years it’s begun to grate a little.

Now the data guys with cameras at the ground, Opta and Prozone, can track the exact positions of players on the pitch. Understandably, this isn’t available publicly as it’s sensitive information. So we did the next best thing and recorded our own data. We wanted to see which keepers attempted to make saves from shots from outside the box (open play) in the front portion of their six yard box, and those that made them in the back portion nearer their line.

It’s a long old process so we stuck to the action for this season. To record where saves were made we used Stats Zone and we also watched the footage of each of the 79 open play goals scored from outside the box after the 25 game stage this season. Now, with the usual rider of small sample size, plus the fact that our eyes aren’t as reliable as x,y coordinates plotted by cameras all over the ground, here’s what we found:

Of the keepers in amber and red in that last graphic, all of them bar Hart have attempted to make a quarter or more of their saves from distance in the front portion of the six yard box this season. Most are attempting a third of their saves from there and some are near half.

Of the keepers in green, only Begovic is attempting more than a quarter of his saves from distance in the front portion of the six yard box.

Standing further forward reduces a keeper’s reaction time. Anything just out of reach has time to dip or curl (or both) into the net as the ball loses acceleration. We reckon if Begovic stood a couple of yards nearer his line, he’d be as stunning as De Gea is at saving open play shots from distance.