A Look at Lukaku

Posted on October 4, 2013 by differentgame

Romelu Lukaku has made a massive impression at Goodison Park already. The fans have fallen for him and goalkeepers have fallen down in front of him (cough*Krul*). We decided to put the forward through his goal expectation model paces.

The model provides us with a benchmark average that all players can be compared to from a goalscoring persepctive.

The shot data in the model incorporates not just where the shot was taken from, but how the ball was delivered to the player taking the shot. In all, there are 30 different types of shot accounted for within the model.

The model rates Lukaku as a good striker, well above average despite his young age and lack of Premier League experience. Applying the shots Lukaku has had to the model we can plot how he has fared during the course of his short 50-game Premier League career: 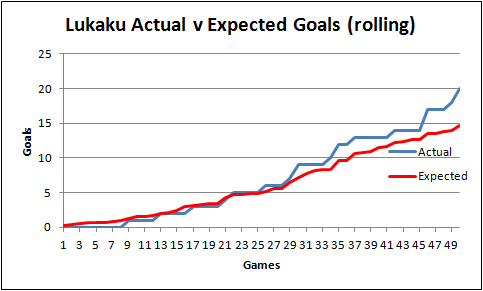 We can see that after 22 games, Lukaku got above the expected goals rate and has stayed there since.  At this stage we can probably put a slow start down to his age, settling in time after his transfer from Belgium, and lack of minutes in his first season at Chelsea where he was mainly used as a late substitute.

During his season with WBA, Lukaku played over 2000 minutes of football and scored 17 goals when the model would have expected him to score 14.

Romelu in the ‘Green Zone’

The Green Zone is the central area of the box where the majority of goals are scored from. Unsurprisingly, chances here are converted at a much greater rate than anywhere else on the pitch. The graphics below show how well Lukaku converted chances from open play while at Chelsea and WBA.

Lukaku excelled when he was teed up from inside the box itself. However, he was worse than the average player at converting crosses delivered from high wide positions. Considering this was how Everton created a huge chunk of their chances last season it looked an area of concern before he’d even kicked a ball for the Blues.

On top of this, Lukaku had only directly got on the end of 2 corners and 2 free kicks (from wide final third positions) for attempts at goal during his entire time in the Premier League. He didn’t score from them either. It looked like a major style misfit.

Now before you start saying Roberto Martinez won’t have Everton playing in the same manner as David Moyes did, consider the fact that Wigan created chances in almost identical fashion as Everton did last season. They just created fewer of them.

Also, this season Everton have already started to create more chances per game from crosses than they did last season. However, two games in to Lukaku’s Everton career he’s managed to suddenly make those images above look like this:

As a team, WBA was way above average at converting chances from wide final third areas in both open play and set piece situations. It therefore seems unlikely that delivery was a major issue last season. In contrast, Everton were below average in this regard despite having Leighton Baines doing a lot of the delivery.

If you sat through the first few Everton games this season you’ll have seen that the build up play was even slower and more methodical than it was under Moyes. The opposition in those games showed little ambition. Against Chelsea, Everton looked more fluid – after all Chelsea – a good team come looking for more than a point. Back at West Ham the week after, Everton laboured again. Until Lukaku came on. And the live cameras at Goodison on Monday night gleefully showed him destroying Newcastle from the off.

What’s changed? The clue may come from this graphic: 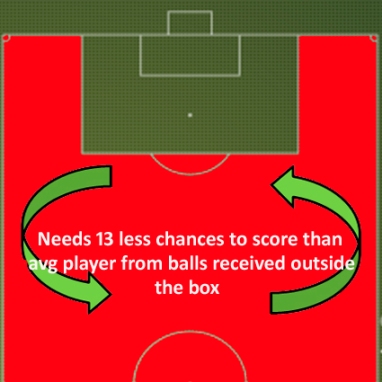 Now this relates to goalscoring. Lukaku has shown a huge propensity during his career (including at Anderlecht) to get hold of the ball outside the box and bear down on the penalty area. People bounce off him, and he slots the ball home. This is a rare talent indeed. At Everton though, due to the will to control possession and gain a territorial advantage, it’s generally more likely that this skill will benefit the team in the build up rather than by hitting teams on the break. Watch this video:

But then consider the speed of these attacks against Newcastle:

This isn’t patient build up play. Having this kid around forces Everton to get on with it and feed him early. Lukaku was caught offside 42 times last season – 6th highest in the league overall, and possibly the biggest culprit in the league if minutes played are taken into account. He’s chomping at the bit.

This goes against the traditional view of Roberto Martinez’ style preference. Patience isn’t an option if Lukaku is going to play – it makes him redundant (remember those stats from set plays). It will be interesting to see how the Spaniard plays things this year with Romelu around. Pragmatism or idealism?

Sometimes the player makes the decision, not the manager.