A Hole in the Hart?

Joe Hart’s recent gaffes have given rise to closer scrutiny of goalkeepers in the last few weeks. Unfortunately, there are few people out there doing much statistical work on them. Even the pros aren’t which was highlighted by Sean Ingle’s piece in the Guardian.

One exception to the rule is @ColinTTrainor who did this during the summer and continues to pioneer with his shot location work and ball placement.

Traditionally, as a keepers’ save percentages are all over the place from year to year, the stats aren’t seen to be reliable and seem to be heavily driven by luck rather than skill. However, traditional work on the subject lumped all shots in together and we know that not all shots are born equal. With ever more sophisticated apps and sites, the data is out there to do a much more detailed job these days.

At Differentgame we’ve gone into such detail on shot location. We’ve divided the penalty area and immediate surrounds into a 5×9 grid giving 45 locations. Having recorded thousands of shots on target (open play only) we have been able to calculate the average save % from each zone in the Premier League. We’ve then grouped similar zones together which we will in due course be using to test the ability of individual keepers to repeat their actions. Here’s what it looks like:

The red band represents shots over 25 yards out vertically and 20 yards out to the side of the box. We don’t know about you but we love the symmetry of the numbers here. The only two zones not showing this are the narrow extremes on the left of the graphic. The save % is much lower here than on the opposite side. At the minute we’re putting this down to the fact that the majority of attacking players in the league are right footed. This means side footed shots from here will curl into the far corner naturally once the player has opened their body out. Right footed players on the opposite side won’t be able to curl it in to the far corner here. The angle of the shot being much straighter and easier for a keeper. That is unless you’re positioned like North Korea’s keeper versus Maicon at the last World Cup. 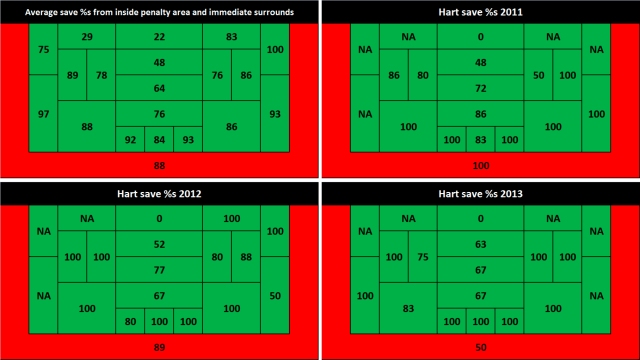 As we can see, Hart has been both consistent and above average in areas closer to goal over the three years. However, we see can see the hint of decline from areas further out. It’s a strange one as a previous study we undertook here shows that positionally, Hart seems ok here. He doesn’t stand too far out which gives him time to react. Unfortunately he still seems sluggish. He always seems to react late. Is this because he’s unsighted or because his footwork is poor? It’s very unusual for a Premier League keeper, and especially so for one that has consistently outperformed his peers over the last 3-4 seasons. All the other keepers who are below average against distance shots stand much further out than Hart does as a starting point.

As we continue to collect the data and watch the footage we’ll be answering this and many other questions about other goalkeepers and shot stopping as a repeatable skill set.

This entry was posted in Sports and tagged Hart, Keeping model, Man City. Bookmark the permalink.

6 Responses to A Hole in the Hart?