In Part One we looked at how the individuals regularly playing ‘in the hole’ have created chances for team mates in the Premier League this season.

It was apparent how differently each went about their business despite nominally occupying the same starting position on the field. Part of this is down to individual style but we also have to assume that for the most part, each player is following orders.

In Part Two we’re going to look at the threat these players pose with their shooting. Just starting with basic numbers of shots and goals is pretty revealing: 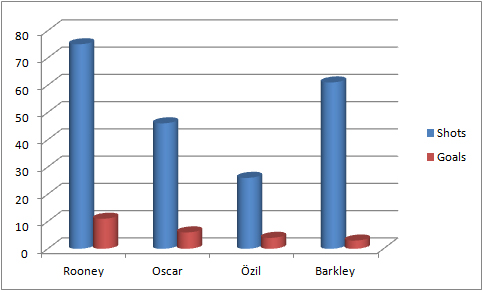 Mesut Özil is by far the least trigger happy of the four. He’s also by far the most efficient. Ross Barkley is firing shots off for fun for a relatively small goal return.

Regular readers will know by now just how important shot location is. By this we mean where on the field the shot was taken from. For a quick briefing on that look here. Rather than tables or bar charts it’s helpful to visualise this sort of thing. The graphic below shows the areas around the penalty box where each has been getting shots on target from. The darker the shade of red the more shots on target from that area. The mini footballs represent the exact shot locations where their goals have been scored from in open play:

Again it’s apparent how different these players are. Although Rooney’s numbers here are skewed slightly by the odd appearance as an out and out striker, it’s still apparent that he is getting into the box more regularly and more deeply than the others.

Of all the players here, Özil takes the least amount of shots from outside the box. He’s also getting his shots inside the box on target more too. Oscar has the all round shot pattern you’d expect to see from a classic No.10. Young Barkley speculates wildly.

If shot locations and volumes are a huge factor in how many goals players score, the next important factor has to be how the ball arrived to them in the first place. It’s easier to slot a nice cut back into your path dead in front of goal than it is to bury a header from the same spot when the ball’s arrived from a cross 35 yards away on the touchline.

Our chance creation model enables us to look at the types of chances these players get on the end of. Specifically here we’re concentrating on penalty box chances: 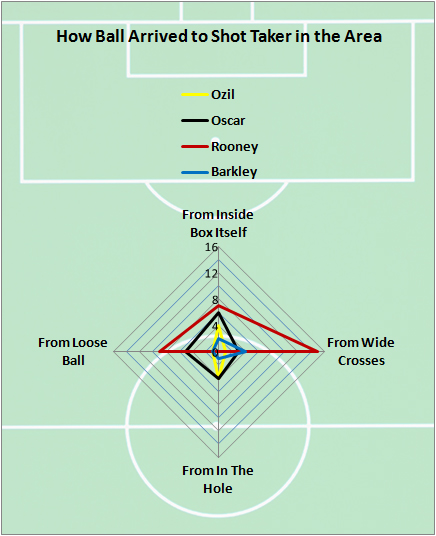 Here we can see the styles of both player and team. Rooney’s attacking instincts cry out – getting into dangerous positions in the box to not only receive passes from inside it but also finding space where the loose ball drops. David Moyes’ penchant for getting the ball out wide for deliveries into the box is also heavily apparent in Rooney’s play. Oscar seems to reflects the natural balance in Chelsea’s attacking play, and Özil the narrowness of Arsenal.

Both our chance creation and shot on target models allow us to put a figure on how the average shooter in the Premier League could be expected to perform given the same shot situations each of our heroes have found themselves in. Here’s the graphic:

The thing that sticks out for us here is the quality of Özil’s shots. Despite taking half the number of shots Oscar has and just a third of the number Barkley has, expected outcomes aren’t much different. Özil looks made for that cliched German efficiency tag.

The original aim was to use the underlying numbers to compare how these four players were getting on this season. They enable us to see how they function within their teams and perhaps more interestingly they enable us to start measuring their direct contribution to goals through their final touches. The models don’t pretend to account for off the ball work or how they influence play through early involvement in passages of play. It’s purely business end stuff.

If we tack both the chances they’ve created and shots they’ve taken themselves together here’s how things look:

Both Rooney and Özil have come under fire this season for their performances. Whichever way you look at it – by process or outcome, they’re still ahead of their peers.