All the data below is taken from the last two seasons of Premier League football.

Do they even play the same position?

My favourite way to test this using data is by seeing where players receive the ball on the pitch.

I’ve split the pitch into twelve positional zones and used a machine learning method called k-means clustering to group players together who receive the ball in similar areas.

This puts Sigurdsson in a group with the likes of Ozil, Coutinho, Silva, Firmino and Rooney.

Barkley fits in with a group of players (Ramsey, Steven Davis, Wijnaldum and Pogba) who receive the ball in more orthodox central midfield areas rather than further upfield ‘in the hole’.

Nominally, Sigurdsson is more of a 10 than Barkley. Actually, however, the difference between the two is pretty small with both lying on the edge of their clusters about to overlap. Do they play in the same position? Most of the time, yes.

What do they do with the ball?

I said above that the players receive the ball in much the same areas. What they then do with it is where the two players start to really diverge.

Consider the viz below showing where each passes the ball when in possesion on the left hand side in the final two thirds (blue successful, red unsuccessful). Barkley’s range is much more expansive:

My expected passing (xP) model, also starts to highlight some big differences and really spotlight those original clusters the two were put into.

The xP model tells us how difficult passes are. For example, a sideways pass by a centre back to a fellow centre back in front of their own box will have a high probability of being completed (95%+).

With Barkley and Sigurdsson, I filtered the database so only harder passes would show on the viz. Basically, that’s those passes that get completed less than 25% of the time in the top leagues. Here’s how they look:

You can see Barkley there trying more vertical passes from deeper central positions while Sigurdsson is all about putting the ball in the box from out wide.

This is where Sigurdsson’s game falls down. He’s well below average at making the more difficult passes stick. Evertonians will be interested to note that Sigurdsson profiles like a poor man’s Rooney here or a very poor man’s Coutinho/Silva/Ozil/Firmino.

Barkley on the other hand is above average at making more difficult passes stick and profiles as a poor man’s Yaya Toure, or a very poor man’s Fabregas.

On top of this, over the last two years Sigurdsson’s involvement has dropped to the point where Barkley is passing the ball twice as much as the Icelander during a game.

Neither comes out as anything like the man to take Everton onwards and upwards but Barkley is a clear winner in the general passing stakes.

I was surprised by how poorly my model rates Sigurdsson’s passing. It’s one you’d want further opinions on from the video guys and the scouts in the stand.

You may have read that Barkley was one of the most creative players in the league last year.

If you look at number of chances created, then yes, Barkley was in the top 10. But so was Sigurdsson.

However, we need to look under the hood because as is clear, all chances are not the same. That’s why there’s such a thing as an expected assist (xA) model. My one is based around where on the pitch the ball was delivered from and to and how often these types of pass were converted historically.

Starting with open play, 201 players over the last 2 seasons have played 1000 minutes and directly created at least 20 chances. Once sliced and diced for how good their set of created chances are, and for how many minutes they’ve played, Barkley ranks 70th and Sigurdsson is 160th.

What? Surely that can’t be right?

You don’t trust my model!? Here’s the top 5: Alexis Sanchez, De Bruyne, Ozil, Fabregas, Hazard. And you don’t have to play for an elite team to get amongst this lot. Tadic, Deulofeu and Payet are right behind them.

Essentially, Barkley and Sigurdsson just aren’t that good at consistent, high quality chance creation in open play. Neither get into, or pick people out in the box enough. Yellow arrows are assists:

Barkley’s had an elite forward in Lukaku to convert the chances he has delivered into actual assists for goals. Sigurdsson’s had…well, we’ll just leave it there.

Having a dead ball specialist is really nice. But Everton have a team problem with creating chances in open play. The Blues are way (way) behind the elite clubs. If Everton lose Lukaku this summer, and don’t get a proper creator in, then the amazing attacking efficiency they’ve posted over the last two years will nose dive.

Who’s the bigger direct goal threat of the two?

Both hit the ball from fairly bad areas and they do it a lot. Both have been worth around 11 or so goals in open play over the last two seasons according to my expected goals (xG) model. Both have scored 10:

Again the difference between the two players shows in dead ball situations. Again, Sigurdsson is king:

The Icelander is adept at getting his free kicks on target. This is a really precious skill to have.

What about off the ball? 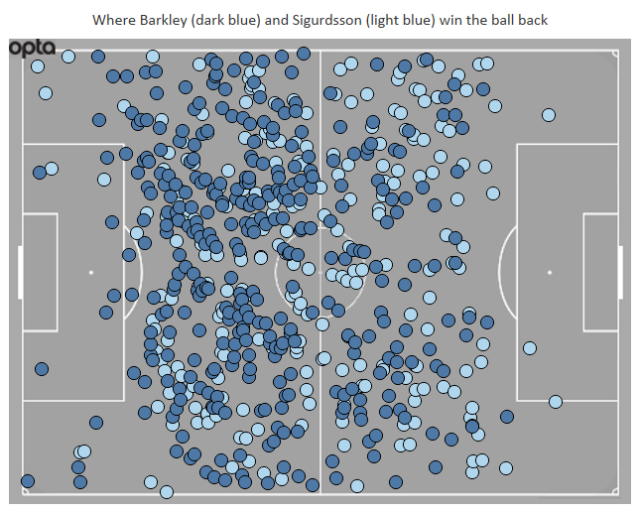 We keep hearing Koeman talking about pressing the ball during his press conferences. To the eye, Barkley often seems physically incapable of being consistently proactive in a higher press. Is this one of the things he likes about Sigurdsson?

After just a short dive into the data, it’s becoming clear that these two players’ roles haven’t been that similar at all in the last two seasons.

If you’re interested in similar profiles for your own football club recruitment department, then get in touch: differentgameanalytics@gmail.com