From Axel Witsel to Cheltenham Town

I’ve been watching a fair amount of football at lower league tiers in the last year both home and abroad.

This is due to a mix of club queries and the fact that detailed data is becoming more and more available from the big data suppliers.

A lot (not all) of teams at lower level appear to have fewer players playing the kind of ‘holding’ midfielder still seen at higher levels in the game.

Whether this is by coach design, due to the pace of the game, a lack of discipline and concentration, or the amount of ball rocketing about in the air etc is up to everyone’s personal interpretation.

Normally, these ‘holders’ are the kind of players I love to ignore at the top end of the game. I’m bored of watching my own team’s players refusing to take risks with their passing. Doubly when they’re not even that good defensively.

I reckon one of my greatest examples of this is Axel Witsel. Disliked in the Riley household, but gracing the biggest sides in every country he’s played in while amassing over 100 caps for Belgium:

But having watched more football at lower levels now, I find myself longing for them. I possibly even dream of having someone with the nous to have held off when it’s clear the ball is about to transition and the opposition come steaming back through the gaping holes.

With this in mind, I’ve been trawling the data for someone in the lower leagues who literally does his stuff on the ball around the centre circle.

And when I say literally, I mean literally. Data bods will know that on a certain data provider’s pitch scheme, point 50, 50 is the centre circle. I set my filters to between 48 and 52 on both axis.

And guess who came up top of the pass ratings on my list with that filter?

Granted he’s top mostly because he’s Mr Safe playing it sideways and backwards, but there’s no doubting he’s bloody good at it.

And yes, a scan down the list brought me to Cheltenham. And a certain Jake Doyle-Hayes.

Now I’ve looked at Cheltenham before. They generally play a back three. This is what I wrote about them on a scouting report not so long since:

Cheltenham rank 3rd of 24 in League Two for open play passes per game, and try and build from the back more than most. However, they often get bogged down in midfield with the first port of call to shuffle the ball wide rather than try anything vertical.

Cheltenham rank 3rd of 24 for the highest press of all teams in League Two. However, they are also quick to fall into the centre of the pitch once the first press is broken to flood midfield.

Cheltenham rank as 3rd best defence of 24 for expected goals conceded. They restrict opponents to few shots and low-quality chances in open play.

Now, young Jake Doyle-Hayes is an outlier in this team in some senses and not in others. Does he shuffle it sideways? Yes: 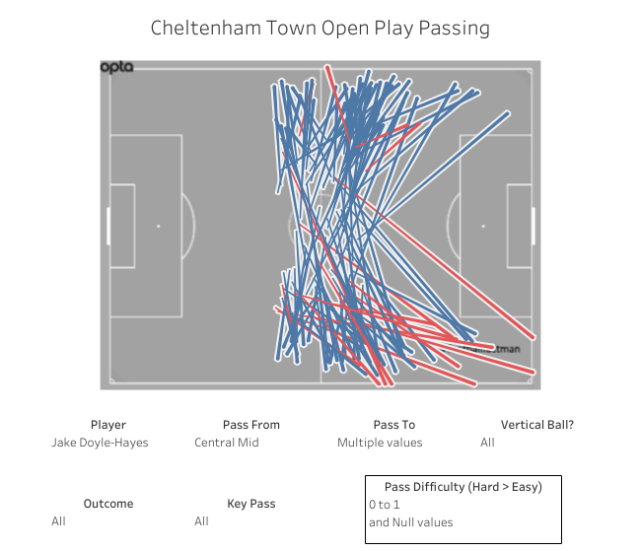 While we’re here, it’s interesting to note the completion difference between spraying it left and right. Look at all those unsuccessful balls towards the right hand side of the pitch! What’s all that about? You’d want to check the video out here and it’s one way that these types of viz (although they can become like a bad etch-a-sketch at times) can be clear and useful.

Does Jake get bogged down? Nope. Unlike his team mates (you can check the rest of them out on the interactive version here https://public.tableau.com/profile/paul.riley#!/vizhome/CTFC/CheltenhamDash) he likes to play the odd long vertical:

It’s then noticeable that as he moves forward, the balls to the channels begin to become balls into the centre of the box. At Cheltenham, he is by far and away the man when it comes to doing this:

You may look at all the red unsuccessful attempts here and think bad thoughts. Don’t, it’s normal. The good thing is these passes are being attempted in the first place. Anyway, to the cherry picker…

I chose this clip to illustrate a few points. Context: Cheltenham have just lost the ball after a longish spell of build up (they got bogged down). This shows them (and Jake) flooding back to cover the middle. Jake (no 21) doing something Witsel-like in the centre circle shuffling it a few yards wide. Then doing something un-Witsel-like, quickly joining in up the pitch and sending in vertical ball to cause some bother:

I set out to find someone lower down the leagues who combined holding midfield characteristics with a penchant to also try something riskier (you know, like actually move). Jake’s that man at Cheltenham. Unfortunately for them they don’t own him, Aston Villa do.

But the internet tells me that his contract is up in a few months. He’s made the transition from the tippy-tap of academy football into winner takes all men’s football. It will be interesting to see what’s next.

Cheltenham also have some other good players bytheway. If you want to know about them or any other player for that matter, get in touch at differentgameanalytics@gmail.com