Last time out at Differentgame we looked at the consistency of finishing from different areas of the field. Today we’re going to look at which teams consistently shoot from good positions.

Using the positional data collected for our expected goals model we can calculate the % chance of scoring for each shot taken. From there we can work out which teams work the ball into the best areas to take a shot. Here’s how it all looks over the last three years:

What are the best ways to get into good shooting positions? Luckily, the team pages of whoscored tells us about each side’s style. As it’s a stats site, we’re making an assumption that the styles they’ve come up with are based on stats. Putting together a matrix we can see what’s hot and what’s not: 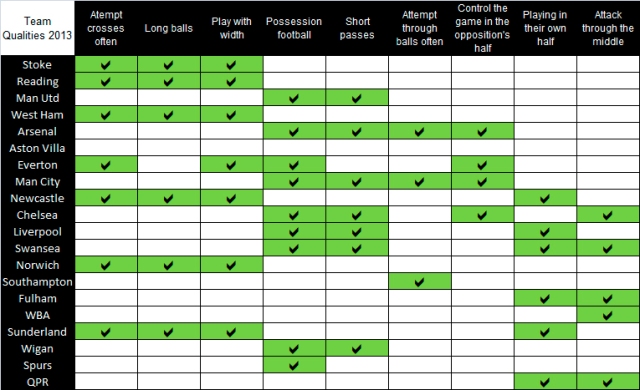 The traditional English method of width, crosses and a decent measure of long balls is an effective way of getting into good positions. Also, short passing and possession football is good for getting you there. Clearly what isn’t effective, though, is recycling the ball (fannying about with it) in your own half all season long or trying to attack through the middle.

From the first graphic we can see that simply getting into decent positions does not guarantee successful conversion rates. Stoke and Reading have taken the shots from the best positions in recent times. Wolves and Blackburn are up there too. 3 of the top 5 teams who have taken shots from good areas have been relegated.

So, if team style effects the quality of shooting position as it seems to, it looks like it’s effecting the rate at which goals are scored too.

Last season, 8 out of 9 teams that avoided ball recycling in their own half, going through the middle and going the traditional English route all scored above the expected rate (Man Utd, Arsenal, Spurs, Chelsea, Wigan, Fulham, WBA, Villa). The other team who also avoided those pitfalls (Southampton) scored just a goal less than expected. Having variety in your play looks like it works. This is hardly surprising. It’s common sense.

Yet half the teams in the Premier League continue to seemingly choose to play inefficiently, with some managers even going out of their way to buy players for big bucks with the express purpose of doing so.

Seems to us that football “philosophies” aren’t particularly effective when it comes to attacking play. Next time we’ll take a look at how they effect the defensive side of the game.

1 Response to Team Styles and Quality of Shot Position