It looks like Everton are finally closing the deal for Bosnian kid, Muhamed Besic. As usual it’s been a protracted affair and full clearance still looks like it’s yet to come, but hey, it wouldn’t be Everton otherwise would it?

Most will only have seen Besic during the World Cup. He played all three matches and won a fair few plaudits along the way. Here, I’m just going to concentrate on his performance against Argentina. First, the good bits:

These were the main passing networks for the Bosnian’s during the game: 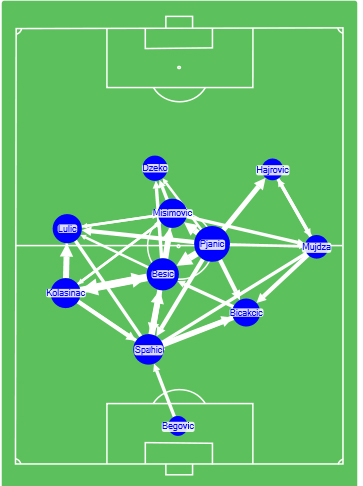 As you can see Besic was the main hub of passing activity for the Bosnians in that left sided deep central midfield role that Barry usually occupies for Everton. The bigger the player’s circle on the graphic, the more touches he had. The arrow thicknesses relate to volume of passes in that direction.

Here he is more in isolation with the graphic on the left showing who he received the ball from and the one on the right showing how he distributed the ball once he got on it: 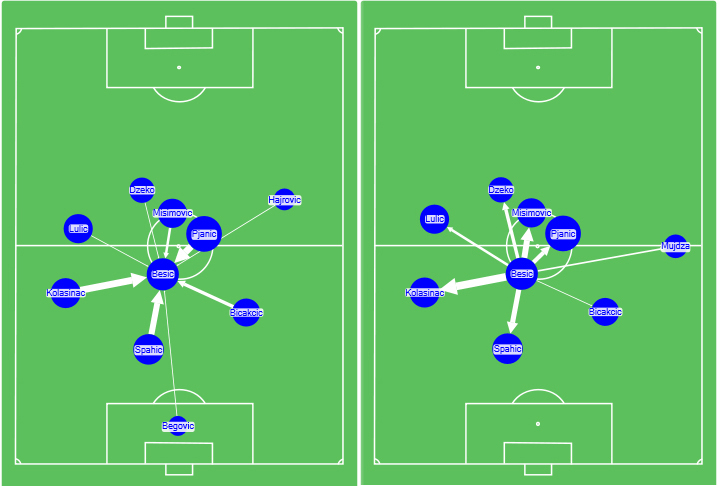 The 21 year old completed 49 out of 50 passes during the game which is impressive however you look at it. The Youtube reel below shows Besic comfortable both under pressure and with time to breathe. What stands out to me as a major positive is that he rarely takes extra unnecessary touches:

Of course, as with all such highlight reels, it only shows you the good stuff. As already stated he only gave the ball away once during the entire match. Defensively, he recovered the ball a lot too during the game but he also showed flaws that I’ve not seen highlighted elsewhere. Before I carry on – a little context. Yes, he is still young at 21, and yes, he’s got Messi in his zone during this game!

All I’ve seen and heard is that Besic handled Messi really well during this game. However, for me, off the ball, Besic showed a tendency to get drawn in very easily – both to the ball and into other team-mates spheres of influence. His decision making and awareness looked poor on a number of occasions. Here’s a short clip from the first half. He’s No.7 in the fluorescent yellow boots:

Firstly, on the corner for the goal he pushes out to mark Garay but decides not to go back in with him. Garay ends up being the one putting pressure on Kolasinac who scores the own goal. Besic ends up raising his hands to his head.

In the second clip (30mins into the game), Besic is inexplicably next to a team mate. Stranded from his usual patrol on the left he makes a desperate lunge, and is unable to prevent the shot coming in. This should probably have been called a foul.

Clip three a minute later, again Besic gets drawn over to the right with a tea mate already in that zone. He gets nowhere near closing the ball which gets slipped into the channel. He’s then forced to follow the man right in, finally letting him go to the central defenders on the 6 yard box. He has three team mates covering two attackers and is still entirely focused on the ball. He scrambles the cross away only for it to drop two two oncoming attackers in the gaping hole now in front of the back four. Again he pushes out but is unable to get a block in to the shot.

Clip four just before half time sees him fail to hold position again despite two men around the man with the ball. He gets drawn in on the half way line and is taken out of the game, only managing to get pressure on again with the opposition deep in the penalty area. The stats on the FIFA state that Besic ran over 12km. Being harsh, it’s not hard to see why. And so to the second half:

In the first clip, Besic follows the ball in twice and gets caught in behind. Once more Argentina get a shot away. Luckily Aguero balloons it.

In the second clip, Besic gets sucked in too tight to Messi. Messi leaves him for dead, plays a quick one two and scores while Besic ends up falling over a team mate.

In clips three and four he’s caught in two minds and gets neither here nor there. Besic doesn’t seem to take into account the position of team mates relative to his own. Argentina create two more chances.

In clip five, after a quick turn over of possession, Besic gets caught on the wrong side of Messi. Messi is away and another long chase ensues climaxing in another desperate lunge from Besic and a narrow escape for Bosnia.

Finally in clip six after another quick turnover, the youngster doesn’t anticipate and is caught in no mans land. Di Maria, left alone in acres starts another attack which ends in another shot for Argentina. Even at the end of this move he’s still totally ball watching as Higuain pulls away to the far post for what would have been an easy tap in should a pass have found him.

If the deal goes through, Besic completes a four man defensive midfield roster that is very comfortable on the ball. The Premier League will be a huge change in pace for the Bosnian so it seems likely he’ll be eased in gently there while getting some League Cup and Europa League action.