Tim Howard – What Chance The Hero?

Tim Howard’s ‘heroic’ display against Belgium was one of the most memorable performances at the World Cup this summer. Everton’s No.1 made a record 16 saves during the game and social media went crazy over it afterwards.

I’ve developed a model that allows goalkeepers’ shot stopping performances to be measured. Obviously, not all shots are the same – a shot from 6 yards directly in front of goal is harder to save then a speculative pop from 30 yards out. The model uses shot location to establish the difficulty of a save. Howard’s performance against Belgium was ranked only 10th during the World Cup by this measure.

The footage shows that many of the shots were from wide angles or from distance – the types of shots you’d expect saves to me made from. It’s the sheer volume of saves that made the performance so memorable. Some of the keeping performances that the model ranked better during the tournament were Kaylor Navas’ against Holland and Greece (pens not included), Guillermo Ochoa v Brazil and Vincent Enyeama v Bosnia.

I think it’s widely acknowledged by fans that last season was Howard’s best in an Everton shirt. Here’s a graphic showing the location of shots on target Howard faced. Red dots ended up as goals, while the black dots were saved: 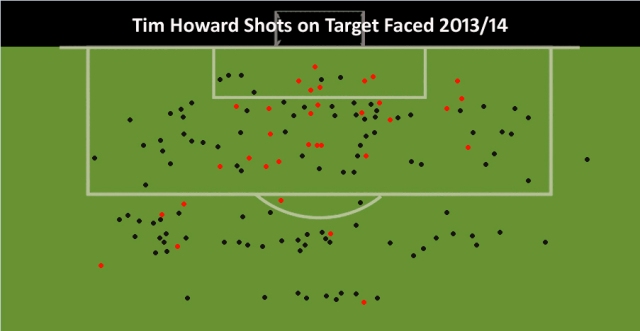 Do the stats agree that this was a great shot-stopping performance? Yes they do. Howard ranked 3rd in the league last season when saves were adjusted for volume and location: 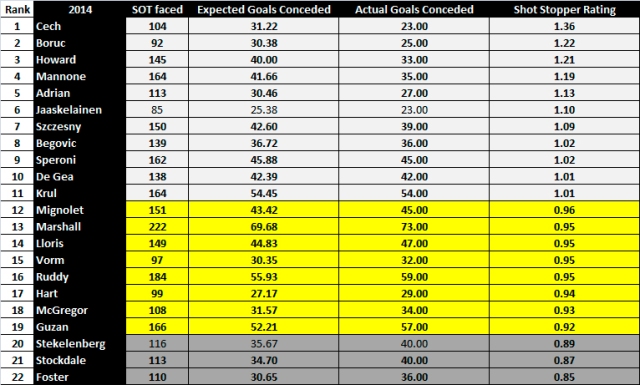 You’ll see from the chart that on average you could expect a team to score 40 goals from the shots Everton conceded last season when he played. Howard conceded just 33. It was a huge over-performance.

Average’s and benchmarks are handy to have, but they don’t really tell us the whole story. In the model, each of the 145 shots Howard faced were assigned a probability value of actually going in based on how shots from that pitch location have fared back in history.

If the season was played over again the outcome would be different. Perhaps the striker hits the ball better on some attempts and worse on a few others. Maybe Howard’s positioning goes awry for the odd one or he slips at a key moment just as the trigger is pulled. Using a simulator, I can replay the same sequence of shots over and over again 1000s of times adjusting for these random elements. In this way I can state how likely it was that Howard conceded just 33 goals: 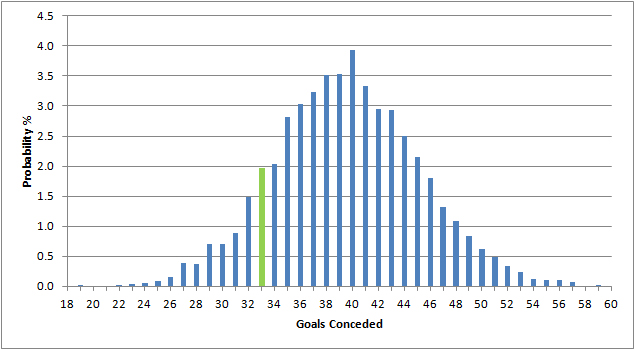 Although the expected number to concede was 40, the simulator says this would happen less than 4% of the time. You’ll see the green bar showing less than 2% chance of conceding exactly 33 goals. The probability of Howard matching this performance again or bettering it is around just 5% (add up all the %s of the bars from the green one down to 19).

My studies have shown that maintaining league average performance (Shot Stopper rating of 1.00) over time is in fact elite performance: 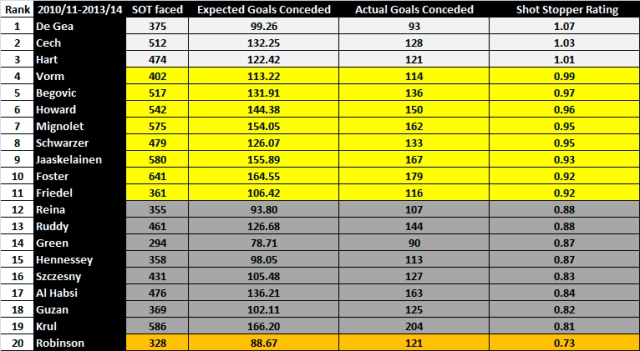 Everton’s defence was more leaky in terms of shots conceded last season than any of the previous 3 under Moyes. Put simply, if it happens again next season, there’s only a 1 in 20 chance of getting away with it so lightly.

Of course the pay off was greater efficiency in front of goal. But that required a £20m striker to be on the pitch. Any chance, Everton?

2 Responses to Tim Howard – What Chance The Hero?