Expected Passing for Everyone!

Posted on February 21, 2017 by differentgame

Regular readers will note that I’ve been boring off about ‘expected passes’ (xP) a lot recently both on the blog and on twitter.

It’s basically assigning each pass a probability of it being completed successfully.

I’ve done this by gridding out the pitch in (roughly) 10yd x 10yd sections. This splits the pitch into 70-odd zones.

All the open-play passes made are then dumped into these zones. Each pass has a start and end zone.

A sideways pass (say) by a centre back to a fellow centre back in front of their own box will have a high probability of being completed (95%+).

A long punt (say) by a right back in his own channel to an attacker in the opposition half in the left channel will have a low probability of being completed (maybe 20%).

This xP model is much more granular with locations than the previous one I’ve been using. The one before had 25 zones.

My xP models do not take anything but location of the pass (start and end) into account.

I decided to include smaller zones with this latest version because centre backs with high passing volumes of simple passes were (probably) falsely crediting their account too much. The new version eases this somewhat.

Here’s the top 10 passers this season according to the model: 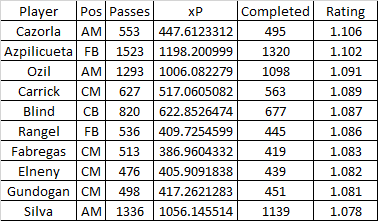 Not bad, one or two dodgy looking ones. What else you got?

So, I was spending too much time trying to get the numbers in that list this top 10 was taken from, to ‘feel’ better. You know what? Sometimes (most of the time) single figure metrics don’t cut it, so eventually I just decided to let the data speak for itself. I chucked the data into Tableau and built a dashboard to visualise it. Have a play around and send a link to your pals.

Just show me mate, I haven’t got time.

Ok, example one. Compare all central midfielders with over 300 passes. Charlie Adam and Cesc Fabregas are playing a different game to everyone else. These two are going through games playing balls that on average would only be completed 75% of the time. As you can see from the graphic below, Cesc is doing it more successfully: 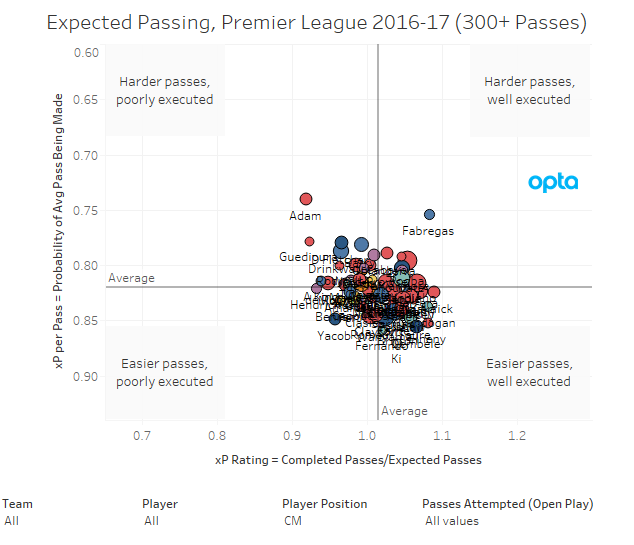 You can also just about see that the model makes a case that Claudio Yacob might be the worst central midfield distributor in the Premier League this season.

Centre forwards. Note that the average lines move. Completing passes when you’re up front is more difficult for all sorts of reasons. It’s therefore fairer to compare them to each other:

Ighalo sticks out here. He may have been lacking goals this season but his hold up play looks to have been decent. Then there’s Sergio Aguero. He’s matching most central midfielders with the quality of his passing.

Tottenham. It’s probably better to have the average lines league wide here rather than moving as they do in this screenshot but it’ll do: 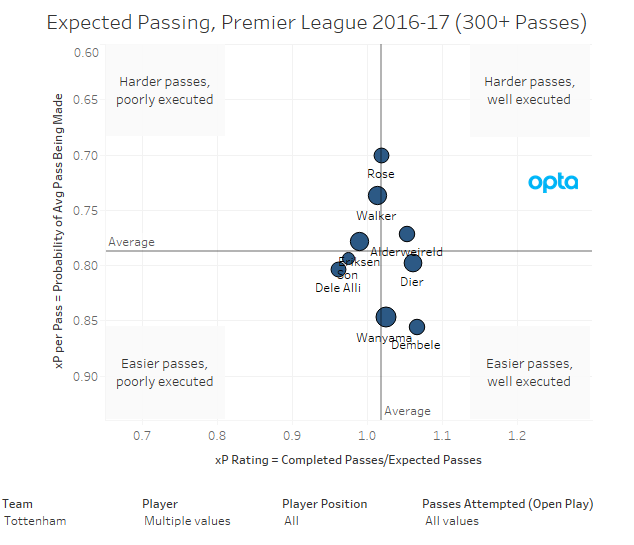 The push ‘n’ run 61 Lilywhites are a compact, big possession, big shot volume kinda team. However, a lot of those shots are distance shots. A lot of teams graphs show more variation than the Tottenham one above. It’s the more cautious passers that boss this team at the moment. Wanyama and Dembele is an uber-safe partnership, the talented attacking mids are struggling slightly and it’s down to the full backs to take the riskier options. Still, their fans won’t be too unhappy with third even if it is a bit dull to watch.

As, I say, play with the dashboard and make your own comparisons. I love it, so ner. However, it won’t be updated for *reasons*. Another point to note is that the model was built in Excel. At a pro club and have data sat round doing nothing? Attended the OptaPro forum and think you need to be a maths n coding freak to model this shit? Fink again, and get in touch.

13 Responses to Expected Passing for Everyone!